The Japanese engineer Yoshiaki Fujinaka founded IWAKI in 1956 in Tokyo. The Danish history of IWAKI begins in the 1970s. Back then, in 1974, the Danish engineer, Hanns Feddersen acquired the sales agency and sole distribution of IWAKI Pumps and founded the pump company, “Feddersen Pumper” (Feddersen Pumps”). In 1992, Hanns’ son, Jan E. Feddersen entered into a joint-venture agreement with the Japanese parent company and established the company “IWAKI Pumper A/S”.

IWAKI Nordic in the early days

IWAKI Pumper A/S started in a small office located in Hillerød with only four employees, which consisted of a warehouse manager, bookkeeper, salesman and Jan E. Feddersen himself.

In 1996, it was clear that IWAKI needed to expand in order to meet the growing demand of pumps for handling of aggressive fluids.

In 1996, IWAKI moved to their newly build headquarters in Hillerød. The daily operations went on here for 17 years and many of the loyal employees that remains today was recruited here as well. The average seniority of the full-time employees was app. 14 years (in 2016).

CEO, Jan E. Feddersen is proud of this achievement as it ensures that employees has a solid grounding and comprehensive experience in pumps and fluid technology, thus being able to provide customers the best service 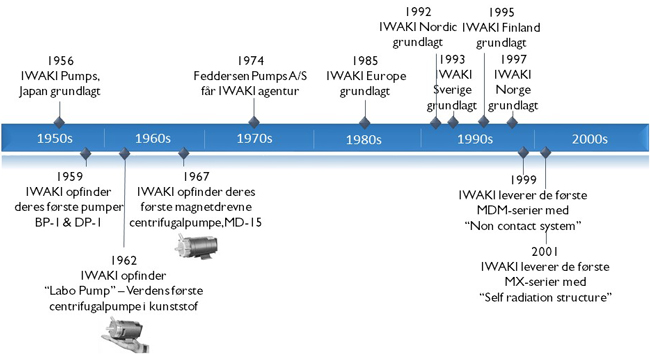 In 1993, only one year after IWAKI Pumper A/S was established, the first subsidiary in Sweden opened. In 1995 and in 1997 subsidiaries opened in Finland and Norway. And in 1999 IWAKI Pumper A/S changed it’s name to IWAKI Nordic A/S.

Over the next 10 years, IWAKI establishes the position as the leading supplier of pumps for aggressive fluids. Not only in Denmark, but in all the 4 Nordic countries and in the 3 Baltic countries.

More space in Hillerød for production, warehouse and office

IWAKI moved in 2013 into their current headquarters at Rønnekrogen in Hillerød. The building is inspired by Japanese and Nordic architecture and encompass a beautiful Japanese garden with a small garden pond. In the spring and summertime, employees often enjoy their lunch or work in the beautiful surroundings. The calm water that trickles from the Japanese garden pond can in addition create a peaceful time-out from a stressful workday.

IWAKI Nordic A/S is today part of the “Feddersen Group”. Including IWAKI Nordic, the group consist of Weber Nordic, Standard Pump Europe and Flowmaster. Feddersen Group is with IWAKI as the backbone of the group, a trusted partner when it comes to handling aggressive fluids in a safe and responsible manner.