You are here: Home / Home / About / IWAKI Pumps in the early days / Vending machines are everywhere in Japan

Vending machines are everywhere in Japan

In the sixties, vending machines became very popular, but they were not as we know them today. In those days, you inserted a coin, and then the machine poured a glass of soda or juice. Naturally, the machine had a pump implemented to move the liquid. Today you receive a bottle or can once you insert a coin in a vending machine.

The number of vending machines in Japan are far greater than any other country in the world.

The amount of vending machines has since the sixties rapidly increased and in contemporary Japan, more than 5.5 million vending machines can be found on streets, stations, public buildings, stores and in companies.

The selection of goods in the vending machines varies, but the most widespread machines sell all sorts of hot and cold beverages. One may also encounter machines selling light meals, e.g. cup noodles, ramen or rice dishes. Some even sell umbrellas, paperbacks and personalized business cards, which in addition is an important part of Japanese business culture. 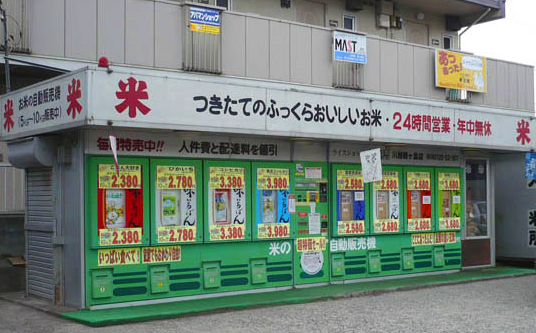 Vending machines sells everything from hot meals to umbrellas and lingerie. The picture displays a vending machine for rice dishes.

Wide acceptance in Japanese society
One may wonder why vending machines have become so popular in Japan, when rest of the western society have not adopted the machine equally. One of the explanations is the low rate of vandalism and petty crime, which ensures that vending machines can be placed outside.

Another reason could be Japanese people’s acceptance of robots. A vending machine can be regarded as a robot and Japanese do not mind buying goods or services from a machine instead of a shop assistant.